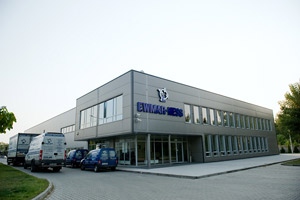 The history of the company dates back to the year 1991.In the initial period it functioned as two parallel companies: Export – Import “EWMAR” SP. z o.o. and P.P.H. “NESS” SP. z o.o., which only differentiated between export markets. in January 2000, in order to make a better use of the possibilities and the potential of both companies, they were combined and now act as a trading company “EWMAR-NESS” SP. z o.o.

The quality of the offered products and their brand was what put the company among the industry leaders from the beginning in all three areas of activity: bearings, electrical products and metallurgical products.
From the beginning of its activity, EWMAR-NESS, as a distributor of bearings, became involved with the most demanding group of consumers of these components – manufacturers of electric motors in the country and abroad. In order to provide comprehensive support for these customers, the company expanded the range of trading with winding cables and wires.The company as a distributor of bearings systematically expanded their channels of sales over the next years, reaching to power plants, steel mills, mines, machine manufacturers, etc.

The company has been manufacturing and selling blowing fans, drivers, geared and H furnaces feeders for several years. EWMAR-NESS also produces low power electric motors used in radial fans. Listed products are manufactured on the basis of the sub-assemblies and components from renowned companies, both Polish and foreign.
Aiming in providing a better customer service, two affiliate companies were started: one in Kutno, the second one in Lublin.
Ewmar-Ness has a strong position on the Polish market as a bearing, winding cables, metallurgical products distributor. The company also produces CH boilers accessories. The company is an authorized dealer of SKF, NSK, PBF (FŁT, ZŁW Kraśnik), KG International bearings and LWW Śląsk, LWW Dahrentrad, ESSEX SUPERIOR winding cables.

In 2000, the company received ISO 9001 certification which guarantees the highest quality of services.

Your message was sent successfully.